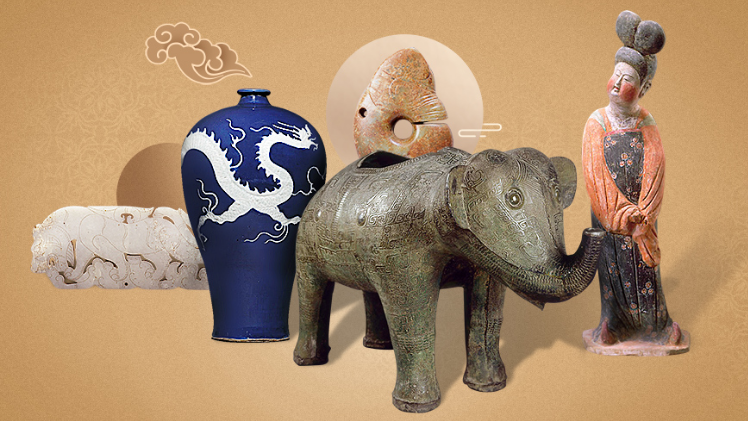 January 30th, France——Tencent and France National Museums Union (RMN) signed a strategic cooperation memorandum at the Grand Palace in Paris. based on the New Cultural Creativity experience and the digital capabilities, Tencent and RMN carried out a deeper cooperative exploration in the domain of cultural exchanges as well as traditional cultural inheritance and innovation. At the signing ceremony, Tencent and the RMN also announced their plan of starting exhibition programs with the theme of “Chinese New Cultural Creativity”, “Global Digital Museums for National Treasures” and other items.

Cheng Wu, vice President of Tencent Corporation said, it’s a great pleasure to build a strategic partnership with France National Museums Union (RMN) on the 55th anniversary of the establishment of diplomatic relations between China and France.

The RMN dedicates itself to art preservation in France. As an Internet-based technology and cultural company, Tencent is committed to promoting traditional culture and innovation. We hope that our joint activities will make great contributions to cultural exchange between the two countries and even across the globe. Today, we carry out officially the ‘Global Digital Museums for National Treasures’ Program, which aims to show precious Chinese treasures to the world at the meanwhile help Chinese people access great treasures without regional restrictions in a digital manner and passing on Chinese traditional culture to the next millennium.”

Patrick Dambron, Chairman of France-China Art and Culture Academy said, “Tencent is an early mover and has strong expertise in addressing the ‘pain points’ faced by museums and art institutions. It can leverage its internet technology to revitalize cultural heritage and engage effectively young people in creation and innovation based on contemporary and traditional cultures.”

Li Shaoping, Minister-Counselor of Culture at Chinese Embassy in France, attended the ceremony and pointed out, “Tencent’s New Cultural Creativity Exhibition at the Guimet this time showed what Chinese cultural creativity looks like today. Through dynamic, fashionable and vigorous methods, it communicates Chinese culture with France and the world. Through the exhibition, people can not only enjoy Chinese classical culture represented by the exhibits but also find out the new environment in contemporary China”

Other participants at the signing ceremony, consultant of cultural ministry of France Matthias GROLIER, Chairman of RMN Chris Dercon, Chairman of France Guimet - Asian Art Museum Sophie MAKARIOU, Honorary President of the committee Friends of Guimet and scholar of Chinese art and culture Olivier Gérard, representatives from the Louvre, Pompidou art center, Orsay museum, and Picasso museum were also presented to witness this strategic cooperation between the two sides.

At the signing ceremony, Tencent announced the commencement of the “Global Digital Museums for National Treasures” Program, and the first treasures included in the program have been determined. France Guimet - Asian Art Museum, a leading cultural institution famous for its Asian collections, selected 25 relics from its Chinese collections. These include some of the most precious treasures of the museum such as the Blue Glaze and White Dragon Pattern Vase, Jade Pig Dragon with a history of over 5,000 years, the world’s largest animal wine vessel Elephant Wine Vessel, Equal Body Tri-color Arhat Statue of the Liao Dynasty and White Jade Tiger of the Western Han Dynasty.

The program of “Global Digital Museums for National Treasures” is established to collaborate with leading international museums to digitalize the most precious ones of their Chinese collections and exhibit on Tencent platforms, especially for the users who have difficulty to visit museums in person for the geographical and economic restrictions.

Tencent and the RMN will also collaborate to show Chinese youths’ creativity works on the international stage. “NEXT IDEA”, an annual innovation contest held by Tencent since the last seven years, serves as a platform to look for, inspire, cultivate and incubate creative youths. In addition to iconic Chinese elements from the Palace Museum and Dunhuang Mogao Grottoes etc., the contest last year also involved French museums for the first time by introducing cultural IP like the Mona Lisa painting by Leonardo da Vinci in order to further inspire the creativity of Chinese youngsters.

At the signing ceremony, the RMN announced to receive the game Sceneries Map along the Silk Road, the winner of the Jury Prize of NEXT IDEA Creative Cultural Product Design Contest, while the Guimet receives The Fifth Great Invention, the winner of the Gold Prize of NEXT IDEA Game Productions Contest, as well as the Dunhuang Flying Apsaras Colored Rock Painting based on the game King of Glory. In the meantime, creative cultural products inspired by Mona Lisa and Dunhuang Mogao Grottoes will also be introduced in culture shops of French museums, showing young Chinese people’s creativity to tourists from around the world.

Sceneries Map along the Silk Road is a themed board role-playing game which, based on the ancient Chinese game called Sceneries Map and with Hexi Corridor as the geographic background, enables players to learn the history and culture related to Dunhuang by involving classic stories of the Tang Dynasty. A space puzzle game inspired by representative Chinese traditional architectural structure “Mortise and Tenon Joint”, The Fifth Great Invention brings the charm of Chinese traditional architecture in front of its gamers.

As part of their partnership, Tencent and the Guimet unveiled the “Chinese New Cultural Creativity” Exhibition ahead of the coming Chinese Spring Festival. “Spring Festival” culture and customs, traditional cultural IP-based creative works by Chinese youths as well as Tencent’s representative works with a mix of technology and traditional culture will be exhibited at the Guimet.

In the Palace Museum Zone, visitors will see exquisite works from the “Singing Ancient Paintings” NEXT IDEA Music Innovation Contest, a good blend of thousand-year-old paintings and digital music. The award-winning comic Palace Museum Echo from NEXT IDEA Comic Contest tells the moving story of how Palace Museum staffs protected the treasures during the War of Resistance against Japan. In the Dunhuang Zone, “Dunhuang Poem Scarf”, based on the sunk panel wall paintings of Mogao Grottoes, brings together 8 themes and more than 200 elements and enables users to design scarves by themselves on WeChat Mini Program and also produce real scarves to wear and celebrate Chinese New Year, feeling the beauty of Dunhuang in daily life. With color as the theme, the “China Red—Inspiration from Rouge” Zone shows how the traditional “China Red” brings new cultural creativity vitality. And in the Game Zone, The Fifth Great Invention is also exhibited.

The exhibitions about the historical customs of Chinese Spring Festival are also very rich. Family photos, lucky money given to children as New Year gifts, family reunion dinner on the eve of Spring Festival and Tencent-invented WeChat Red Packet by combining the thousand-year-old Red Packet tradition and modern mobile payment technology, all of which depict the history and customs of Chinese Spring Festival, present vividly an ancient China, a modern China and a cultural China to overseas Chinese and foreign people.

Are you sure you want to send this feedback to Wantedly?